The Times Higher Education Impact Rankings was announced on Wednesday, April 22 2020. It labels itself, rightfully so, as “the only global performance tables that assess universities against the #United #Nations’ Sustainable Development Goals (SDGs)”. The ranking uses “carefully calibrated indicators to provide comprehensive and balanced comparisons across three broad areas: research, outreach and stewardship”.

I have enjoyed this launch for two reasons: the first being the virtual “mini” summit that was very well organized and attended for the first time and the second was the colorful outcome of the tables, an uncommon sight in university rankings.

I said tables on purpose, as the “joy” brought to me by the individual SDGs tables, was soon tamed down when the overall table was issued.

Despite that, it still has the credit of not being correlated (and even copycats) with the worldwide ranking top 10, it still gave me the feeling of injustice for diluting the effort done by some universities on individual SDGs.

Duncan Ross himself must have sensed the same as he frequently pointed out to some “extraneous” outliers that had performed really well but were not captured in the top 10.

In a twitter discussion with Jacob Jensen from South Denmark University, we agreed on the importance of this ranking but I voiced my “disappointment” at that specific point.

Why would you include an overall ranking if you want to highlight the efforts on each SDG, especially as some universities, by the constitution, cannot tackle all #SDGs, or at least 4 as the ranking requires?

Moreover, institutions submit data for different SDGs, and still are ranked overall in one table with a custom-made formula.

That point was still a hard pill to swallow for me despite Duncan’s explanations.

So I decided to think of alternatives, if the overall ranking was a must!

I started by saying that maybe we can take a tally of the highest scores for each university and have an overall score.

Although #CoronaVirus inflicted #lockdown make us have some time to kill, I still wasn’t that bored to do such a job. Plus, I am more inclined towards numbers by nature.

Finally, I am a big fan of Formula 1 and car racing in general and believed that the points system they adopted for the championship was a good solution to a problem they were facing with the previous points system:

How frustrating it was to have a driver able to win the championship without having one a single race! Flying low and safe picking up points here and there and amassing enough of them to be champion! Happened even at world championship level twice! With one win for a full season, #Hawthorn and #Rosberg were still champions! More recently, the #Prost – #Senna debacle caused by the previous system also yielded unusual results.

Ok, so enough with #F1, I could go on forever there.

Why not apply the championship rules on the #SDG #Impact #Ranking and see what results come up.

I will expose the results I got next with some comments for an objective debate, not on “my” methodology but on the facts it unveils and whether THE would gain more in losing the overall ranking all together or having a more equitable model in place. 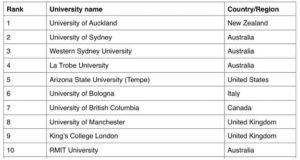 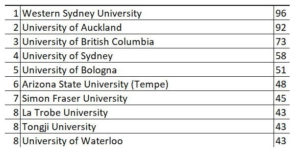 At first sight, the second version provides a more “colorful” regional spread while pushing down 2 UK universities (#Manchester and #KCL), bringing in one more #Canadian (#Waterloo) and one #Chinese (#Tongji). That is only on the top 10.

It surely reinforces the position of #Australian universities at the top.

Finally, it pushes #RMIT out and Simon Fraser in.

More interesting are the results of the top 100.

I included the results fully after and the key findings:

–         6 universities that were not ranked in the overall THE Global Impact ranking entered my ranking:

o  James Cook University (Australia) and Nanjing Agricultural University (China) as high as in 20th position – they were not even in the low tiers on the overall THE ranking despite ranking 1st on #SDG17 and #SDG2 respectively!

–         Up to 23 universities went into the top 100 gaining at least more than 75 positions in the process with American University (USA) and RCSI University of Medicine and Health Sciences (Ireland) ranking as high as 20th.

o  University of Calgary drops by 61 spots to 90th.

o  University of Manchester drops by 25 points from 8th to 33rd.

As I was doing the analysis, I got feedback on twitter from Duncan Ross related to the rationale of overall rankings and their necessity. For those of you who do not know it, transparency and responsiveness is one of the strong points of the THE folks.

I am including it here for the sake of channeling the discussion in one place. 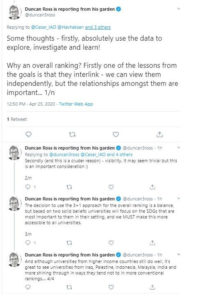 So as you can see, Duncan Ross ‘s intervention rules out my plea to ditch the overall ranking, I still have to discuss with you, the idea of how to compute an overall ranking in a more adequate way.

For whatever it’s worth, I still believe that a better way of getting an overall score and the above is one proposal and I hope it will open a discussion on the matter leading to an even better result for this promising, and soon to be leading ranking as I see it. You are all invited to share your thoughts!

The top 100 according to the F1-Wazen ranking: 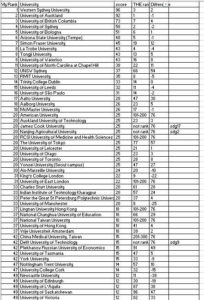 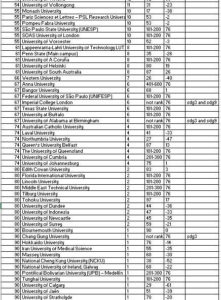